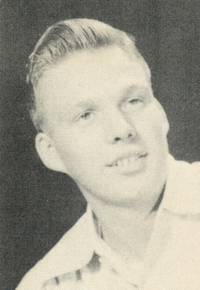 An only child, due to the loss of his father and his only uncle when he was two, Bob grew up knowing the meaning of hard work, the value of money, and the importance of family. As he put it “I was raised by a bunch of women,” but would add that he was always surrounded by love and affection from his mother, grandmother, and two aunts. He loved working, his church of 90 years, meeting new people, and music.

Bob attended Christ Lutheran School by way of walking the half block to the building, and graduated from Perry High in 1949. After graduation he worked several jobs, ranging from digging pipeline ditches with picks and shovels, to helping his Uncle Emil Voigt with farming and raising cattle. Bob learned to weld while working on a gas plant near Lucien, starting a life-long career with oil field and pipeline construction. In 1952, as the Korean Conflict escalated, he joined the Army at Camp Polk, Louisiana, and was stationed at Ft. Dix in New Jersey, serving as an MP at the base prison. Upon learning that he could type, the base commander transferred him to base headquarters as a clerk. After an honorable discharge in 1953, he worked for ONG, replacing gas lines “all around” the Perry square, manning a jack hammer. That’s when he decided that buying a welding truck and becoming an independent welder was the thing to do. And in 1957, he went to work for the R. L. Frailey Construction Company, mostly as a certified welder until his retirement in 1985. In 1986, he purchased The Shoe Hut in Perry and operated that store and another in Kingfisher for 11 years, fulfilling his dream of owning his own business. Those who knew him quickly learned that he genuinely liked people and the day-to-day interaction that went with that retail setting.

In 1980, after playing a dance at the Bohemian Hall, north of Perry, as a member of the Country Travelers Band, he asked fellow band member Bernice Schieffer to join him for a cup of coffee. And the two of them became soul mates for 42 years, playing music for countless thousands of people in and around Perry, Perkins, Ponca City, Blackwell, and Enid. In essence, Bernice and her family adopted Bob as a member of their large family, with Bob becoming like a father and grandfather to all.