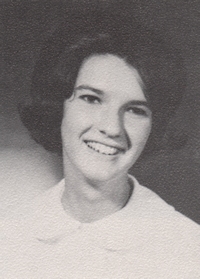 She was a 1965 graduate of Perry High School, Perry, OK and earned a Business Administration degree from Oklahoma State University at Stillwater, OK in 1969. On September 3, 1967, she and Raymond Keith Brand were married in the First Christian Church at Perry, OK. She was employed as a Loan Officer with the Small Business Administration.

Funeral will be at 10 a.m., Tuesday, March 13, 2001 at the First Christian Church in Perry, OK. Burial will be in Grace Hill Cemetery, Perry, OK under the direction of Brown-Sisson Funeral Home. Memorial may be made to the American Heart Association or the American Diabetes Association.

Her husband, parents and 1 brother, Jimmie preceded her in death.