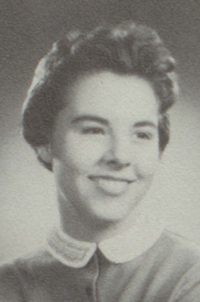 The makers of Coke and Diet Dr Pepper have lost a loyal customer. Joyce Allen Zorba, age 83 of Stillwater, Oklahoma, passed away Sunday, March 20, 2022, in Jacksboro, Texas. She was the eldest of three sisters, born February 16, 1939, in Enid, Oklahoma, to Pat and Alice Yandell. Her father worked in the oil field, so Joyce moved frequently when she was young. The family finally settled in Perry, Oklahoma, when Joyce was nine. In 1957, she graduated from Perry High School where she participated in a variety of activities. Annual staff, Girls State, Senior Class Treasurer, Teen Town Council Treasurer and the National Honor Society Secretary were only a few of her achievements.

After graduating from high school, Joyce attended the University of Oklahoma for one year and then returned to work in Perry. She began dating and ultimately marrying Jack Zorba in 1961. They moved to Stillwater where she helped Jack operate Zorbas Menswear. During that time, they welcomed two children into their family: Chad and Jill. Joyce was a loving and caring mother dedicated to her family. She and Jack retired from the clothing business and entered real estate. In 1987, Joyce began a new career working for the Oklahoma State University Alumni Association, until finally retiring in 2015. Even though Joyce attended the University of Oklahoma, she was a diehard OSU fan and would tell family and friends she “bled orange.”

Jack and Joyce were longtime members of St. Andrews Episcopal Church in Stillwater where she was famous for coordinating the annual Lebanese dinner. Joyce was an excellent cook who learned the art of preparing Lebanese cuisine from Jack’s mother. She eventually began a catering business on the side. Exchanging recipes with family and friends brought her great joy. She also enjoyed meeting with friends to crochet. Still deeply rooted in their Christian faith, the couple eventually became members of Life Church in Stillwater.

She is preceded in death by her husband of 52 years Jack Zorba; her parents, Pat and Alice Yandell; brother- and sister-in-law Rudolph and Twyla Zorba of Perry, Oklahoma; and brother-in-law Tom Walton of Grand Prairie, Texas.