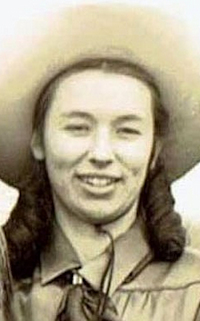 ﻿- 16 year old daughter of Mr. and Mrs. C. D. Lacy who lives at 711 Jackson street. She was born in Oklahoma City, August 3, 1923. Before attending Perry schools she went to school in Stillwater for one year.

She has been a member of the Red Hots, pep organization, for the past four years and served as drill leader one year. She was also a member of the high school student council for two years.

Jowena will attend some college next year, but is undecided as to which one it will be. She plans to take a course in art and become a commercial artist. Her hobbies are horses and rodeos.

Jowena Estelle Pearson, age 95, died on Monday, Feb. 25, 2019, at the Joan and Diana Hospice Home in Kingman, Arizona. She had lived independently in her own home until one week before her death.

She was born in Oklahoma City, Oklahoma, to Clarence David and Neva Estelle (Hall) Lacy. She was raised in Oklahoma where she excelled in school and enjoyed riding horses, often riding in parades and participating in rodeos. As an adult, she worked as a Real Estate Agent in California.

She loved music, especially jazz. She liked to write and garden and she adored her many dogs over the years.

She was known for her intelligence and her love of education. She was unable to attend college as a young woman, but went on to graduate from Monterey Peninsula College when she was in her 50s.

Jo was preceded in death by her parents, her sister Roberta (Bobbie), and her husband Lawrence Pearson.

She is survived by her children: David (Deborah) Hargis of Charlotte, North Carolina, Layne Hendrix of Carmel Valley, California, Kitty Hendrix of Liberty, New York, Bonnie Fosso of Deadwood, South Dakota, and Terry (Rexford) Hendrix-Smith of El Dorado Hills, California. She is also survived by her niece, Patti (Jess) Markle of Farmington, New Mexico, other relatives, and her grandchildren.

Jo requested no services. Her ashes have been interred at Mountain View Cemetery, Kingman, Arizona.