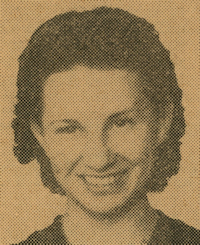 – daughter of Mr. and Mrs. H. B. Mathews, is 17 years old and lives at 622 Grove street. She was born November 14, 1922, in Springfield, Missouri. In addition to the Perry school she has attended school at District 80 and District 81.

She belongs to the Journalism and Home Ec clubs in the high school and has received awards for perfect attendance two years. She was art editor for the Journalism club. Her hobbies are collecting pictures, sewing, and cooking.

Next year she plans to attend college, taking a course in education for a teaching profession. Just which college she will attend, she has not decided.

During her high school years, she was a member of the National Honor Society.

She worked as a Wal-Mart Fast plant caretaker and retired as the Wichita State University honors department secretary.