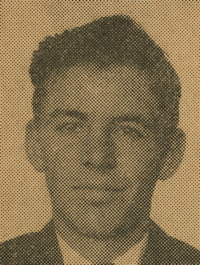 Fishing, hunting, boating, and swimming are his hobbies.

﻿Daniel Lee Sanders was born to Luther and Rosa Sanders on August 9, 1922, in Perry, OK.

He served in the 45th Infantry Division from 1940 to 1944 and was stationed in France, Italy, and North Africa as a Forward Artillery Spotter. Returning home he met and married Virginia Ann Schumacher in Oklahoma City, OK.

He worked as a drilling rig foreman for Champlin Oil in Oklahoma, Texas, and Kansas. He later worked for the Bureau of Mines in Keyes, OK, Amarillo, TX and Spokane, WA.

He is survived by his daughter Bridget (Bill) Livingston of Ramah, NM, and son Timothy (Leann) Sanders of Hauser, ID. He is also survived by five grandchildren,18 great-grandchildren, and two brothers, Bob of New Orleans, LA, and Raymond of Lafayette, LA.