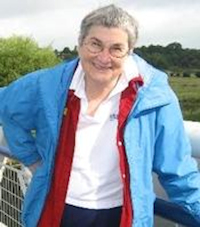 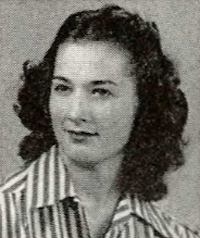 She was born November 5, 1927, at Macomb, Oklahoma, and attended grade school at Stratford, Trousdale and Macomb. She was a student of Trousdale high school before coming to Perry.

Her parents are Mr. and Mrs. Vernon Morrel of 708 Seventh street. Carol wants to attend Oklahoma A. & M. college after graduation.

Born November 5, 1927, in Trousdale, Oklahoma, she was the daughter of Vernon and Edna (Thomas) Morrel. She graduated from Perry High School in 1945 and continued her education at Oklahoma A. & M. graduating in 1949.

Shortly after graduating, Neysa and James Chouteau were married in Perry on June 4, 1949. She was his beloved wife and friend for 60 years. He preceded her in death on November 6, 2015.

Neysa (or Carol or Sunny as she was also known) was an editor and author for many years with McGraw-Hill Book Company and prior to that with Webster Publishing Company. She was author/editor of several special education series as well as with other disciplines. She continued to write and edit on a freelance basis after early retirement.

She was a mentor with Mentor St. Louis for nearly 10 years and an active co-member with the Loretto Community. She edited Loretto Magazine for 20 years. Her kindness and keen sense of humor are among the qualities that will be sorely missed by family, friends, and community members.

She was preceded in death by her husband, James.