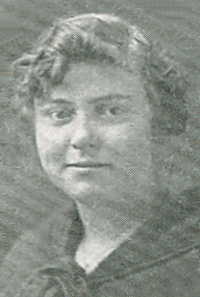 Born March 30, 1897, in Perry, she was the daughter of William E. and Ada A. (Baldwin) Wadsworth. Dollie ived all of her life in this community, graduating from Perry High School in 1917.

She taught several terms of school and was employed at the post office in Perry. On Nov. 24, 1920, Dollie and William Bartholomew “Bill” Ringler, Perry business man, were married.

She has been an active member of the Methodist church for many years.

Funeral services will be held at 3 o’clock Sunday afternoon from the Methodist church with Rev. C. Merritt LaGrone, pastor, in charge. Burial will be in the Grace Hill cemetery.