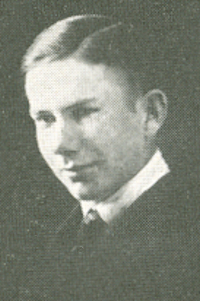 Born September 5, 1902, in Perry, he was the son of Fred E. and Zenia (Hotson) Carrier. George graduated from Perry high school with the class of 1920 and was an honor student.

Besides his father and mother, he is survived by one brother, Ralph Carrier of Perry, and three sisters, Mrs. Bernice Soule and Mrs. Nadine Shaw of Perry and Mrs. Thelma Robinson of Oklahoma City.

Funeral services ill be held from the Newton Funeral home at 3 o’clock Sunday afternoon with Rev. Percy Beck, pastor of the Methodist church, officiating. Burial will be made in the Grace Hill cemetery.