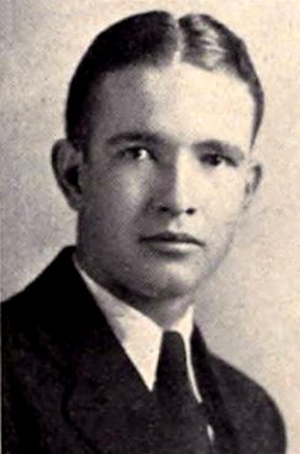 Ellis C. Clark, 40, of Hutchinson, Kansas, fell to his death in a stair well of the Raleigh Hotel in Washington D. C. early August 30, 1944. The coroner ruled his death as accidental.

Born December 3, 1904, in Hamilton, Missouri, he was the son of Sylvester “Ves” Higby Clark and Eva Ruth (Webb) Clark. He graduated from Perry High School in 1922 and continued his education at the University of Kansas law school, graduating in 1930.

He was an active member of the bar for fourteen years and served as the Hutchinson city attorney. For nearly two years, he had been an Office of Public Affairs litigation attorney for the Kansas district. He was at a conference of litigation attorneys when the accident occurred.

In 1933 he and Mildred Ione Jones were married.

In addition to his widow, he is survived by a daughter, Judith, 10, and his parents Mr. and Mrs. S. H. Clark, Perry, Oklahoma.

He was buried at the Fairlawn Burial Park, Hutchinson, Kansas.