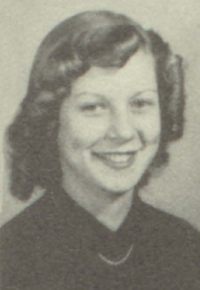 Bonnie was born August 2, 1933, in Perry, Oklahoma, the daughter of John Aiden (J.A.) Wadsworth and Lois (Perkins) Wadsworth. She grew up in Perry and is a 1951 graduate of Perry High School. While in school, she was a twirler and played trumpet in the band.

She and Arthur “Art” Hamby were married December 8, 1956 at the First United Methodist Church in Perry. For many years, they owned and operated Dairy Queen located in the 500 block of Sixth Street In Perry. During that time, no one went hungry while they were operating Dairy Queen. She was also employed several years for Mid-Continent Permanent in Perry.

They adopted a son and daughter, Jon and Shelby.

Bonnie served as a Blue Bird leader and loved to do ceramics. She and Art were inseparable for 66 years. They loved attending school sports and their grandchildren’s activities.

Bonnie was preceded in death by her parents; one sister, Dolly Marie Barker; and an infant son, Vincent Craig.

A memorial service will be at 1 p.m. Saturday, July 30, 2022 at the First United Methodist Church.