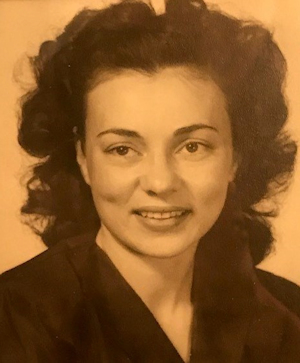 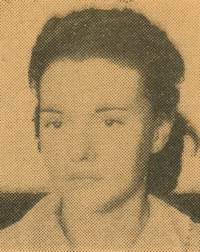 Pauline will attend Oklahoma A. and M. college in Stillwater next year to take a course in psychology.

Pauline B. Goad, 97, passed peacefully on January 30, 2021, at Longhorn Village retirement community in Austin, Texas, where she has resided since 2014.

Pauline, or Polly as her friends called her, was born in Sand Springs, Oklahoma, on March 25, 1923, to Clifford and Ella Bobbitt. She was the second of four children. She remembered her childhood fondly. She was a tomboy who played with her brother “Buddy,” neighborhood boys, and her many cousins who came for family dinners on Sunday at her parents’ home. They went to see Tom Mix and Buck Jones cowboy pictures at the local theater – she always played Buck Jones when they played cowboys & Indians.

She learned to play card games as a child from her grandmother and mother, who were both skilled players. Her family would play cards after dinner and she became a very good player. Throughout her life she enjoyed a game of cards, whether it was Pitch with her mom and siblings, bridge club with her friends or Uno with the family. She was a voracious reader all her life and a talented violinist in her youth. She was probably most remembered as an imaginative storyteller with a quick wit.

When WWll ended, she attended Oklahoma State University. She enjoyed college life and made the Dean’s Honor Roll. Her sister, Marian, was engaged to an Oklahoma University football player – Calvin Kelley. Her future husband, Bill Goad, was the brother of one of Calvin’s teammates, Bobby Goad. Calvin introduced Bill to Polly and they started dating in August 1947. She married Bill Goad June 21, 1948, in Stillwater, Oklahoma. They remained married until Bill’s death in November 2013.

After graduating from OU, Bill became a petroleum engineer. Together, Bill and Polly started WE Goad, Petroleum Engineering, in the mid 1960s.

In addition to her husband and parents, her siblings preceded her in death – Carol Ritthaler, Charlie Bobbitt, and Marian Kelley. Family was very important to Polly, so she stayed in touch with her extended family, which included nieces and nephews, until her death.

Polly loved her family and was deeply loved in return. She is survived by her children – Beth Jones (husband Tim); Katherine Williams; David Goad (wife LaVonna) – and her grandchildren Richard Wyrick (wife Sadie); John Williams (wife Molly); Kate Geren (husband Ray); Sam Williams (wife Nicole); David Goad (wife Alicia); Tiffany Early (husband John) and eight great-grandchildren. She organized family vacations each year to Rockport, Texas, after her children had their own families, which strengthened the extended family ties and allowed all the “cousins” to get to know each other even though they lived in different cities. She adored her grandchildren and great-grandchildren and said that spending time with them was the happiest time of her life.

She was a hero for animals in need, and she took in many rescues and strays. Polly was a sustaining donor to the Austin Humane Society, Austin Pet’s Alive, and a lifelong donor to ASPCA.

Her personality was magnetic. She consumed the room with her smile. She was a force. She was loved, a good friend to many, and will be missed.

A virtual Celebration of Life will be held in March 2021.