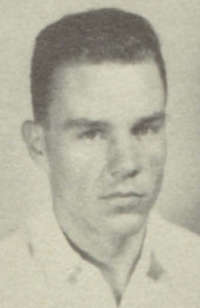 He is survived by his two remaining children Jon Hamby of Perry, OK and Shelby Webb of Perry, OK. He also leaves behind four grandchildren, Cameron Rogers, Karlie Harper, Justin Hamby, and Meagan Clark. He was loved by many great-grandchildren who are too numerous to name in this short obituary.

If you had the unique pleasure of knowing Art Hamby, you know that he was a simple man who loved many people and many things. Art Hamby loved Jesus. He followed Jesus and was a living example to those of us who loved him and what it meant to be disciple. Many in the family heard Bonnie say that she was relieved that her and Art did not live at the same time as Jesus because she was sure he would have left home to follow him. Art Hamby was never heard of speaking ill of someone and was never mad enough to break with his character of gentleness and kindness. He was gracious, kind, and honest. He spent many nights sitting alone reading from his bible, which gave him immeasurable joy and hope. During his last hours the words on his lips were of those scriptures and prayers that had given him strength during his time on Earth. A joy in the sadness of his loss is knowing that he now walks with Jesus in paradise.

Art loved his bride Bonnie more than anything else. It is well known in the family that they never fought and rarely argued. Neither seemed to believe that whatever the issue at hand was, it was certainly not important enough to waste time being upset with each other. He loved to tell the story to his family that when he saw her he knew she was the one for him. Together they built a legacy of love that lives on through generations. Art also loved his children, grand-children, and great grandchildren. He is remembered by many for hosting pool parties and Halloween unlawful assemblies, Branson MO vacations and being a horse on hands and knees for grandchildren. It goes without saying that Art Hamby loved good desserts.

Art loved the city of Perry. Despite his grandchildren’s pleas, he refused to move away even in his last days. He graduated from Perry High in 1951 and never lost his love of Perry Maroon wrestling and football. Art loved driving the downtown square and he loved the people of Perry, Oklahoma. He served his church, First United Methodist, as usher for more than 50 years and owned a Dairy Queen in Perry where he slung Hamby Burgers and employed Perry’s youth. He loved and retired from Ditch Witch and spoke fondly of his days there for the rest of his life. After his retirement he worked for several companies in the community, including Parrish Electric. He proudly served his country as a combat-engineer and was stationed in Germany from 1952-1954 and this was the longest time he spent away from Perry.

Art Hamby was simplistic, in the way that simplistic can be meaningful, strengthening, and wholesome. He loved fully, and showed the rest of us how life can be lived with purpose and dedication. He was he epitome of the word “example” and the world is less than it was before his passing. We have now only the memory and the lessons he taught us to carry on his legacy.

Funeral services will be held Saturday, October 22, 2022, at 10:00 AM at the First United Methodist Church in Perry, OK.