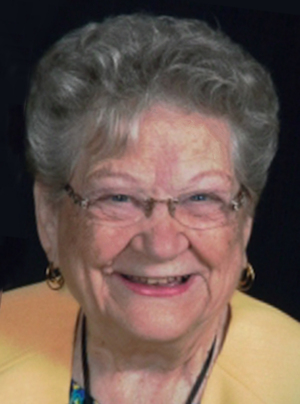 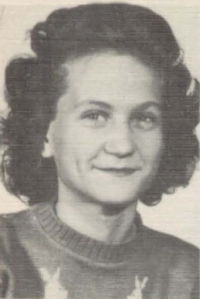 Doris was born January 21, 1930, in rural Pawnee County, the daughter of Claude E. and Adah (Rogers) Manning. She attended Lone Jack School in rural Pawnee where she completed first and second grades before moving to Perry where she graduated high school in 1947. She was PHS Basketball Queen and Football Queen Attendant and renown state champion twirler. One week after graduating she started her career as a telephone operator for Southwestern Bell Telephone Company.

It was in summer band that she met John Bridal, her grade school sweetheart and who became her husband on June 16, 1950. Her husband worked for Shell Oil Company and was transferred to Elk City where they lived for 5½ years and Doris became a stay-at-home mom. The family moved back to Perry in 1955 after purchasing the Bordon Milk Distributorship. Doris then became her husband’s bookkeeper.

When her daughter Cathie started school, Doris became active in the community as a home room mother, Blue Bird and Camp Fire leader, Bible School teacher, a member of Band Boosters and co-president of the Shooting Star Square Dance Club. Doris was a member of the Perry Golf and Country Club and has been a precinct worker for the election board, volunteer for the blood bank, hospital auxiliary, United Fund drives and the Perry High School Alumni Association. She was the 2018 Xi Epsilon Rho, Beta Sigma Phi Woman of the Year.

She was an active member of Perry Study Club in which for many years served as style show chair, which were works of excellence making her a role model for younger women coming up as leaders in the organization. Doris served as chairman of her Perry High School class reunions six times. She was involved or co-chaired Perry’s Annual Christmas Tour of Homes for 22 years.

Other community activities included garden clubs, Noble County Family YMCA, Main Street of Perry, Chamber of Commerce and Stagecoach Community Theatre. She was baptized as a teenager and became a member of the First Christian Church, later joining the First United Methodist Church.

She is survived by her daughter, Cathie Kincaid, and grandson Travis Wilhelm and his wife Kristi, all of Perry.

Preceding her in death were her parents, husband, three brothers and sisters-in-laws: Cleo and Nancy Manning, Edwin and Norma Lee Manning and Melvin and Virginia Manning; and one foster sister, Mary Barnett.

Funeral service will be at 10 a.m. Tuesday, October 25, 2022, at the First United Methodist Church in Perry. Rev. Hagen Jackson, pastor, will officiate.