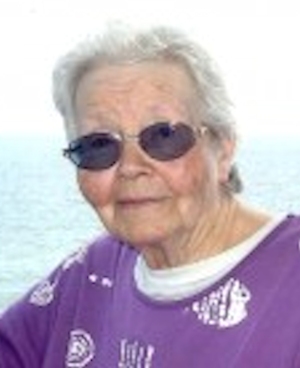 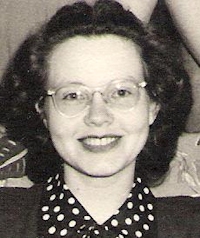 Other than Perry, Georgia Mae attended school at Henryetta. She is a member of the Kappa Teen high-school sorority, and the Christian youth fellowship.

She has been a student council member, a member of the glee club, and secretary of her sophomore class.

Miss Durbin plans to join the cadet nurse corps and take her training at Oklahoma City.

Mrs. Mauney was born July 23, 1926, in Henryetta, OK, and was the daughter of the late George Cleveland Durbin and Ida Christine Lloyd Durbin. She was a graduate of Perry High School and on September 22, 1949, she married Charles Clifton Mauney, who preceded her in death.

Mrs. Mauney was formerly employed as a clerk with the County Treasurers Office in Oklahoma and in her later years was a housewife and she was of the Baptist Faith. Georgia enjoyed sewing, reading, and traveling, and most of all, she enjoyed watching her birds.

In addition to her parents and husband, Mrs. Mauney was also preceded in death by two sisters, Dorothy Johnson and Patricia Faw Faw.

Mrs. Mauney is survived by three sons, Bill Mauney (Delinda) of Stony Point, Dickie Mauney (Cathy) of Morganton, and Chris Mauney (Rita) of the home. She is also survived by one daughter, June Minier of Lenior, N.C.; three sisters, Fern Swart of CA, Agatha Queen and Mary Rupp, both of OK. along with eight grandchildren and one great-grandchild.