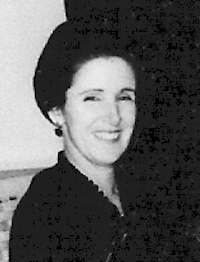 – 17 years old, born at Verden, has lived in Perry five years. She is the daughter of H. S. McGill, route two, Perry. Grade school at Edmond training school, Hayward, and Perry was included in her education. She is a member of Perry Rainbow Girls and national honor society.

Lavaun reports her plans for next year are not definite.

She was born August 27, 1925, to Horace S. and Fynes (Fleming) McGill, and reared in Oklahoma. She received a Public School Teachers certificate at 18 years of age and taught elementary schools doing World War II. She was a member of University of Wisconsin Dames and earned a PHT (Pushing Hubby Through). She moved to Gainesville from Madison, Wisconsin in 1952.

She was an Alachua County Deputy Tax Assessor, was in charge of Multiple Listing for Alachua County Board of Realtors, was awarded Life Membership in Gainesville Garden Club and Women of First Presbyterian Church, volunteered in Surgical Waiting Room as member of Alachua General Hospital Auxiliary, was chairman of Project for Thornwell Home for Children in Clinton, S.C. for over 20 years and was a Preschool teacher at First Presbyterian Church for over 20 years. In spite of health problems throughout her life, she felt blessed and truly believed that God placed the right people and opportunities in her life at the right times.

The family will receive friends at a reception in Gordon Hall following a memorial service at First Presbyterian Church on Saturday December 1 at 10AM with Dr. Robert Shettler officiating. Burial will be private at Forest Meadows Central Cemetery. The family requests that in lieu of flowers, contributions can be mailed to Thornwell Home for Children, 302 South Brood St. Clinton, SC 29325-0060.