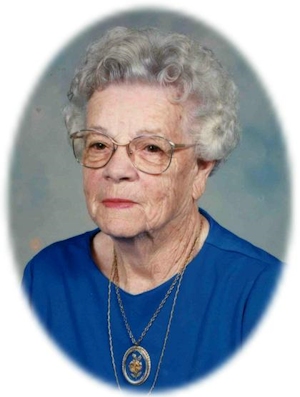 She married Avery Crispin on November 11, 1933 in Stillwater, Oklahoma. He preceded her in death on December 1, 1994. She was a member of the Orlando Christian Church for more than 50 years where she served in many different roles.

She loved to cook and bake and to have all her family over for dinner. She was a very good seamstress, but her favorite hobby was making quilts. She made quilts for herself as well as for many of her nieces and nephews. She will be greatly missed by her family.

Funeral services will be 10:00 a.m. Wednesday, September 3, 2008 at the Orlando Christian Church. Rev. William Park will officiate. Interment will be in Morris Heights Cemetery. Services are under the direction of Brown-Dugger Funeral Home in Perry. Memorials may be made to the Orlando Christian Church in care of Brown-Dugger Funeral Home, 1010 N. 7th Street, Perry, Oklahoma 73077.

She was preceded in death by her husband, Avery Crispin, one daughter, Evelyn Ingels, her parents, George and Lulu Campbell and three brothers, Ralph Campbell, Kenneth Campbell and Lester Campbell.