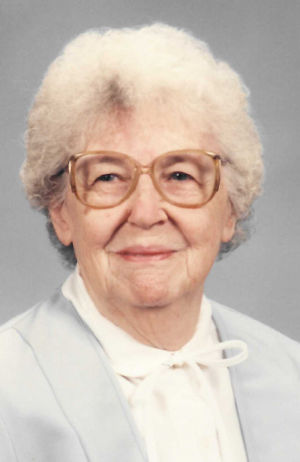 Funeral services will be 10 a.m. Wednesday in the First Presbyterian Church with Rev. Tim Boggess officiating. Interment will follow at Grace Hill Cemetery. Services are under the direction of Brown-Dugger Funeral Home.

Ebersole was the daughter of Bradford J. and Effa Lee (Carlock) Woodruff. She was born Nov. 27, 1915, in Perry.

Following graduation, she was a member of the editorial staff of the Ponca City News. Later, she became managing editor of the Journal of Oklahoma Medical Association.

She married Asbury Ebersole Dec. 22, 1940, in Perry. She was chief clerk of the War Price and Ration Board for Noble County during WWII. She was a member of the First Presbyterian Church and the Ladies Tuesday Afternoon Club.

Tennis was her favorite and only recreational sport. She played intramural tennis while at OU and won many medals and trophies. She continued playing tennis until age 75.

She was preceded in death by her husband, Al in October 1977; her parents; two brothers, Marsh Woodruff and Raymond Woodruff; and one sister, Maxine Mugler.

Memorials may be made to the First Presbyterian Church of Perry.