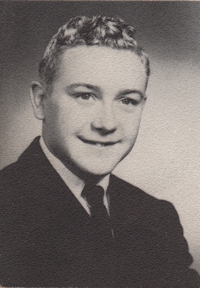 Former Perryan, Alan Gary Alexander, 53, Fayetteville, Ark., died at 9:05 a.m. Monday, March 23, 1992, at Fayetteville. Funeral will be at 10 a.m. Thursday in the chapel of Brown Funeral home. Burial will be at Grace Hill cemetery.

Alexander was born June 5, 1938, at Lucien, the son of Ashley and Lucille Alexander. He attended schools at Pawnee and Perry and was a graduate of Perry high school. Alexander was active in band and wrestling at PHS. He attended the University of Oklahoma.

A former Charles Machine Works district representative, Alexander had been involved in fire engine sales at the time of his death. He was a member of the First Baptist church.

He was preceded in death by his mother and one brother, Ashley Alexander Jr.