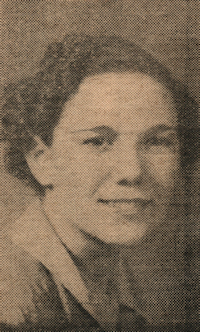 – daughter of Mr. and Mrs. Frank Boone of Perry was born in Perry on July 14, 1919 and attended the elementary grades in Perry and high school in Oklahoma City and Perry. Following graduation she expects to take a business course.

Imogene was a United States government civil service employee who worked for the draft board at St. Louis, Missouri before retirement. She moved back to Perry nine years ago after living the majority of her life in St. Louis. She was a member of the First Christian Church and the Hope Circle.

Her parents and three sisters, Helen Yarger, Thelmalene Lowry and Velta Brenaman, preceded her in death.