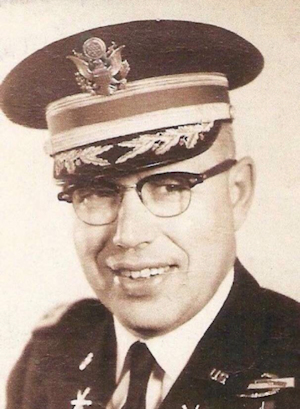 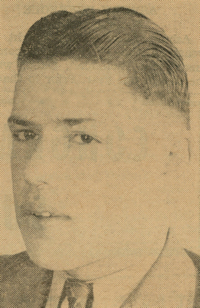 ﻿- was on the wrestling team for two years. He won a letter both years and was third in the district in wrestling this year. He worked for a local contractor during his school days. He plans to study architecture at Oklahoma A. and M. following graduation. Bob is the son of Mr. and Mrs. James A. Berger of 124 Holly Street. He was born in Perry in 1920. Schools he has attended besides those in Perry are Boise City, Kingfisher and Mil-wake, Oregon. His hobbies are stamp collecting, cartooning and photography.

Robert Berger, was the son of Mr. and Mrs. James E. Berger. He graduated from Perry High School in 1939 and attended Oklahoma A. and M. college before entering service in September 1940. He served as top sergeant of battery C of the 158th field artillery, previous to transferring to the air force. He was commissioned in June, 1943.

While in the air force he served as co-pilot on a Liberator and received the Oak Leaf Cluster to the air medal for completing five mission over enemy-occupied Europe. The cluster was presented by Colonel Irvine A. Rendle, of Rawlins, Wyoming, Liberator group commander. The citation read:

“For exceptionally meritorious achievement, while participating in five separate bomber combat missions over enemy occupied continental Europe. The courage, coolness and skill displayed by this man on these occasions reflect great credit upon themselves and the armed forces of the United States.”

The mission this day would see the 392nd suffer its heaviest losses, both aircraft and aircrew members, of any individual raid ever flown during its combat experience in World War II. Before the mission was completed, (14) aircraft and crews would be lost and (9) other ships damaged by fighters and flak, all totaling (154) casualties. General briefing for (28) aircrews was conducted between 0400-0530 hours.

MISSION LOSS CIRCUMSTANCES: The returning eye-witness account stated briefly that this aircraft was seen about (15) minutes after target, drifting away to the left from formation and under control; but no parachutes seen. The time given was 1500 hours and weather was clear, ‘CAVU’. German reports on the capture and circumstances involved for some of these crewmen were given as follows: Report #KU1249 reported the crash site of the plane as (1) kilometer southwest of Kastenholz-County of Schlettistadt/Alsace on 18 March (the time of this crash was given as 1445 hours in this account, however, by the crew’s log as to when they were shot up and bailed out after target would place the correct time of the plane’s crash around 1512-1520 hours). The above German Report was made by the Air Field Headquarters A-10/VII at Hagenau/Alsace three days later on 21 March. It also noted the capture of Sgt. Losey at Kinsheim County-Schlettstadt/Alsace on 18 March at 1615 hours as well as Sgt Bell in the same location at 1620 hours. This Report continued to summarize that the following crewmen were apprehended once but escaped on a transport on 20 March near Dornata and then were recaptured again in Freiberg: Clover; McMillan; Bellerive; Royal and Berger; and that Galler and Ross had been admitted to the Reserve Hospital Colmar/Alsace – Surgical Department both having fractures of the legs with minor wounds (Galler instep fracture and Ross with left ankle broken and “complete recovery expected for both”). A supplementary message to the same report stated that Lt. Berger had been captured on 20 March at 1600 hours at Rappoltsweiler/Als. and that he, along with all the other non-injured crewmen were being sent to Dulag Oberursel on 22 March 1944 for further interrogation. All (11) crewmembers were accounted for in this enemy recap report as being taken as Prisoners-of-War. Other injuries of this crew not mentioned in any German reporting was that Lt. Berger had gotten frost bitten in the ground ordeal, and Sgt. Royal had been wounded above the eye.

INDIVIDUAL ACCOUNTS OF CREWMEN FATES: There were several crew members who made out ‘Casualty Questionnaires’ after repatriation from POW status to U.S. authorities who gave varying accounts of the crew’s emergency situation on this mission. One such was that of the crew primary Navigator, that of (then) Captain William McMillan who summarized the following circumstances: On the route flown he noted that the “Group Lead overshot turning point and the IP. causing Group to fall behind (the) Division, and be attacked by (90) fighters, and their crew left the formation between Colmar and Stuttgart west of the Rhine River and the remainder of their block was shot down or left formation”. He continued this account by noting the entire crew began bail out at 1510 hours after being hit by heavy enemy fighter fire; that all crew members got out of the plane around (30) seconds before the aircraft exploded; all parachuted within a five minute period and landed within a (25) mile area and subsequently were captured within two days later. His report continued by stating that all members were accounted for after the war except for Sgt. Ross who had to fall out of a forced march across Germany as a POW due to illness of fever. Regarding the fate of Pilot Clover (which was not known at this time after the war by U.S. authorities presumably), the Navigator further stated that Lt. Clover had continued interphone conversation all along describing condition of the plane, the attacking fighter positions, and ending with a warning that the aircraft was about to blow up followed with the “bail out” order. The Co-Pilot, Lt. Berger, in his account stated their ship had not actually left the formation at all (their formation position was that of ‘lead ship’ in the 2nd Section, Low and Left of the main ‘lead’ formation); that he knew all crewmen got out of the ship safely; and later he did see all crew members at Camp Lucky Strike (Le Havre, France area) and at Camp Kilmer, New Jersey. In regards to his query about the Pilot, the latter noted that Lt. Clover had given the “bail order” on interphone followed by ringing the ship’s alarm bell; that he last saw Clover at the Dulag-Luft interrogation center; and had obtained hearsay evidence that the Pilot had been taken to an Officers’ POW Camp at Sagan, Stalag Luft III. A third crew member also rendered a ‘Casualty Questionnaire’ account (name of crewman not given) on the individual members sometime after the war. This account noted that he had heard from each and all crew members later (except for Lt. Clover whom he had seen at Camp Lucky Strike after POW release); that he had been in touch with these men from their homes and knew their general “status” as related to him concerning their ordeals and wounds. He stated that there were (11) men but the extra crew member’s name he did not recall at this writing, however he had heard from this individual who also stated he had been wounded in the hand by flak during their emergency (this 11th individual was the second navigator person, Lt. Ray Mitchell). It was further noted that he learned that one other crew member, Sgt. Losey, Flight Engineer, had had an operation on his neck while in POW camp to remove some scar tissue and dirt thought to have been caused from a wound of flying glass during the crew in-flight emergency. It seemed in conclusion that reporting crew members thought that most or all of their aircrew were on their 22nd or 23rd combat mission this day.

Lt. Berger returned to duty and had a long successful USAAF career.