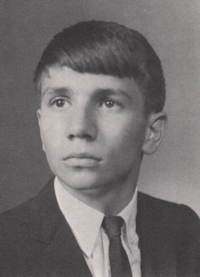 As a baseball coach, a Sunday School teacher and Bartlesville Public Schools spokesman, Ken Dolezal spent his life standing up for kids. Dolezal, who served as the school district’s community relations supervisor and as a community leader in many roles, died Friday after a battle with cancer. He was 52. Funeral services will be at 10 a.m. Tuesday at First United Methodist Church, with the Rev. Jennifer Long officiating. Interment will be at Memorial Park Cemetery under the direction of Stumpff Funeral Home.

“We are very saddened by the loss of our very special friend,” Bartlesville Schools Superintendent Gary Quinn said Sunday. “Ken was beloved by everyone who came in contact with him. He was very positive, very upbeat, had very high morals and high integrity. He always looked out for the best interests of the students.” The National Merit scholarship winners, the volleyball championships and the millage election notices all found their way into the public light through the efforts of Dolezal, who provided news releases and photographs to reporters in northeast Oklahoma for 25 years. A friend to the reporters with whom he worked, Dolezal often shared stories about his life growing up in Perry, his newspaper career, his family and his church life.

Dolezal was born Nov. 16, 1948 in Merced, Calif., and moved to Oklahoma at age 5. He graduated from Perry High School in 1966, attended Northern Oklahoma College from 1966 to 1968, and received a journalism degree from Oklahoma State University in 1972. He received a teaching certificate from Northeastern Oklahoma State University in 1984. Dolezal worked several years as a reporter and sports editor for Oklahoma newspapers. He joined Bartlesville Public Schools in 1976 as community relations supervisor. He helped establish the Oklahoma Schools Public Relations Association, serving twice as president. An active community volunteer, Dolezal served in many organizations including the Boys and Girls Club Executive Board, YMCA Committee, United Way committee and Downtown Kiwanis. Dolezal’s community service extended to area ballparks, where he served many years as a coach for Little League, Pony and American Legion baseball.

Dolezal is survived by his wife of 22 years, Linda Dolezal, and a son, Tony Dolezal. He was preceded in death by his parents, Lewis and Mary Dolezal, and his infant son Donald Miller Dolezal.