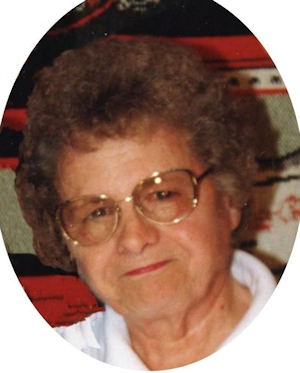 Preparation for a lucrative career is the plan of Velma Mae Hendren, daughter of Mr. and Mrs. W. B. Hendren of Kaw street, who will be a member of the 1943 graduation class of Perry high school.

Miss Hendren has attended the local schools throughout all 12 grades and has decided to enroll at Draughon’s business school in Oklahoma City for further training.

Although born in Oklahoma City, Velma Mae has lived in this city all her life. She is a member of the Red Hots pep club and this year was named worthy advisor of the city Rainbow Girls’ organization.

Velma Mae Chrz, 89, of Perry, Oklahoma, was the daughter of William Bryan and Evelyn Alexander Hendren. She was born February 20, 1924 in Perry, Oklahoma and died Wednesday, August 14, 2013 at Green Valley Nursing Home in Perry, Oklahoma. She attended and graduated from Perry High School.

Velma married her best friend and sweetheart, Ralph Charles Chrz on August 11, 1946 in Perry, Oklahoma. Velma and Ralph were married for sixty-seven years and were truly life partners. They enjoyed being part of Bryan’s activities growing up and spending time together on the farm. She will always be remembered as a very loving person. Velma loved her family and close friends and spending time with not only them but her grandchildren was her greatest joy. She was so proud of each and every one of them and enjoyed being able to be a part of not only their lives but being able to watch as their families grew. Her great-granddaughters were very precious to her.

Velma had a very special relationship with her twin sister, Thelma who she was dedicated to taking care of and loved the time they had together. She even volunteered at the nursing home while spending time with her sister. She was a member of the American Legion Auxiliary. Velma was an active member of the First Baptist Church of Perry, Oklahoma and taught Sunday school there for thirty years until her health declined.

She was preceded in death by her parents, Bryan and Evelyn Hendren and her twin sister, Thelma Hendren.