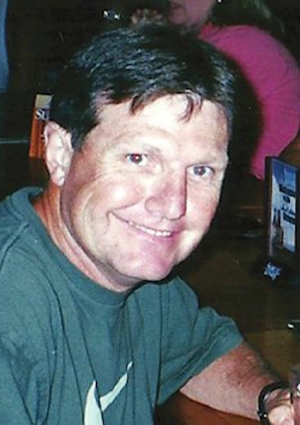 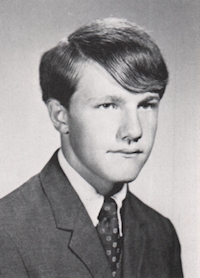 Jacob N. Boone, 60, husband of Elaine (Marc-Aurele) Boone, passed away peacefully on August 5, 2013 at the home of his daughter and son in-law, Erin and Jeff Shelton in Rockport, MA surrounded by his family.

Jake was born in Hamilton, Texas on September 28, 1952. He was the son of the late James “Bill” and Dorothy (Roads) Boone. He graduated from Perry High School in 1970. After high school, Jake enlisted in the United States Marine Corps. and was stationed in Norfolk, VA. This is where he met his wife, Elaine who was there serving in the Navy. After their time in the military, Jake and Elaine returned to Perry to begin their family. Jake worked as a machinist for Taber’s Welding and then later at The Charles Machine Works.

Throughout his life, Jake was an avid runner and cyclist. He was a member of the Perry Road Hogs Running Club and also a member of the United States Cycling Federation. He participated in many marathons, triathlons and bike races with close friends of his in Perry, but his favorite was when he ran the 2010 Falmouth Road Race in Falmouth, MA with his son, Chris and two daughters, Renee and Erin. Jake was also a huge Oklahoma Sooners Football fan. Every Saturday in the fall if he wasn’t at the game, one could find him in his living room cheering and yelling at the television. His love for his family will never be forgotten.

He is survived by his beloved wife of 39 years, Elaine (Marc-Aurele) Boone, his daughter, Renee (Boone) Trupiano and her husband Mike, his son, Christopher Boone and his wife Joy, his daughter, Erin (Boone) Shelton and her husband Jeff and a sister, Betty J. Boone. He was the greatest Grampie to Michael and Jack Trupiano and Jacob Shelton. He also leaves many close family members including Betty L. Taber, Jim & Betty Taber, David and Judy Taber, Larry Taber, Kathy Scott, Julie and Marc Oden, Jimmy Taber and his daughters Katelyn, Evelyn and Samantha, Walt and Nancy Hirschman, Jay Hirschman, Reno Mathews, Christine (Hirschman) and Joe Lake and their daughters Kenna, Kira and Keely and William, Dukie, Bill and Jason Tell.

He was predeceased by his parents, James “Bill” and Dorothy (Roads) Boone, guardian, C.J. Taber and his brother, Gary Walkling and Mike Taber.

Funeral services will be held at the Massachusetts National Cemetery in Bourne, MA. The family invites all family and friends to join them for a Memorial Mass at the St. Rose of Lima Catholic Church in Perry, OK on September 15, 2013 at 12:00 p.m. In lieu of flowers, donations can be made to the Hospice of the North Shore & Greater Boston, Inc., 75 Sylvan Street, Suite B-102, Danvers, MA 01923.