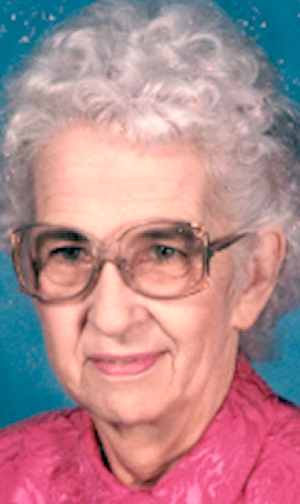 Ida Naomi Barnes, who graduates with the class of 1943 next week, is one of a family of eight, four of whom are now serving the country. She has three sisters, one a coast guard auxiliary member, one a nurse and the third in civil service.

A brother, Lee Edwin, is in the army. Miss Barnes’ plans for the next year are still indefinite.

She was born in Perry and has lived near this city for 18 years. Her parents are Mr. and Mrs. Lee Barnes of route four, Perry. Naomi attended Perry public schools and Noble county rural schools before entering PHS.

Services Visitation will begin on Thursday, February 2, 2006 at 4:00 p.m. at Mission Park Funeral Chapels South. Funeral services will be held on Friday, February 3, 2006 at 10:00 a.m. at the funeral home. Interment will follow at Mission Burial Park South. The family requests memorials may be made to Riverside Baptist Church where she faithfully served the Lord for many years. Mission Park Funeral Chapels South.