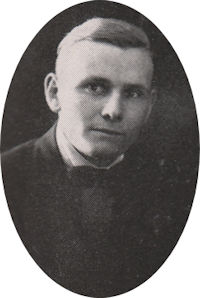 Joseph Edward (Joe) Dolezal, Jr., former city lease broker died at 6:06 p.m. Thursday (January 23, 1958) in Perry Memorial hospital where he had been a patient since Jan. 14. He had been in ill health several months.

Services will be at 2 p.m. Saturday in the First Presbyterian church where he served as an elder with Rev. Milford W. Castrodale Jr., pastor, officiating. Burial will be in Grace Hill cemetery under the direction of the Newton funeral home.

Dolezal had been active in layman’s work of the Presbyterian church and once served as a member of the city council. He was a past chairman of the Noble county Republican central committee. Dolezal was a director of the Exchange bank.

The family said those who would like to make their remembrance a gift for cancer research are invited to do so instead of sending flowers.

The body will lie in state at the funeral home and at the church but the casket will not be opened after the service.