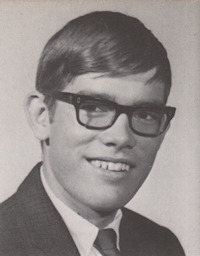 At the age of 16, he served in the United States Navy during Vietnam. Terry worked on the USS Bonhomme Richard aircraft carrier.

He received his Bachelors of Science from Northeastern State University. Terry worked at Dresser Atlas from 1974 to 1990. He worked for the City of Eufaula for over eighteen years.

Survivors include: his mother, one son, one brother and two sisters.

He is preceded in death by his father, Loy Denney; and one infant son, Austin Denney.