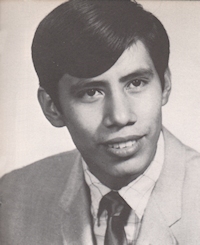 Ira Hoke Dent was born December 2, 1948, in Perry to Abraham Dent Sr. and Wilma Dailey Dent. He attended Northern Oklahoma College and served in the United States Navy from Januay 2, 1970, until his honorable discharge on December 3, 1975. He worked at Tinker Air Force and as a driller in the oil fields and for the Otoe Tribal Police. He was a member of the Church of Jesus Christ of Latter Day Saints.