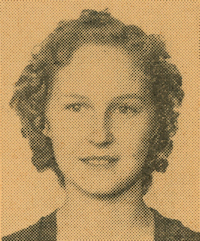 – 18 years old, is the daughter of Mrs. Maude Wright, 220 Delaware street. She was born in Ferry March 10, 1922 and has always attended Perry schools. She is a member of the Red Hots, pep organization, and has taken part in both softball and tennis activities in the school. Snap shot collecting is her hobby.

Marjorie was preceded in death by her husband, Ross A. Johnson Jr.; parents Jim and Maude Wright and brothers, Harry and Orville Wright.

Marjorie was greatly loved and will be missed by her family and friends.

A graveside service will be held on Wednesday, April 27, 2016 at Grace Hill Cemetery in Perry, OK at 10am.