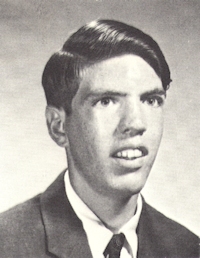 Funeral will be at 2 p.m. Tuesday, Sept. 14, 1999, at the First Baptist Church in Perry. Rev. Curtis Cook will officiate and burial will follow in Grace Hill Cemetery under the direction of Brown-Sisson Funeral Home.

White was born Dec. 19, 1951 in Perry, OK, the son of Herman A. and Evelyn Gertrude (Leniger) White. In addition to Homeland, he was formerly an employee of TG&Y in Perry. He was a member of the First Baptist Church in Perry and the Noble County Independent Bikers.

Memorials may be made to the Oklahoma Medical Research Foundation for cancer research.