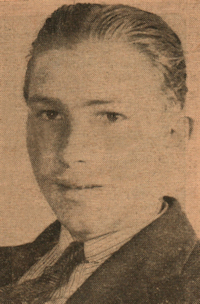 – son of Mr. and Mrs. Carl Gordon of south 18th street, was born in Perry in 1922 and has attended Orlando and Perry schools. He was in the Perry Senior play, freshman play at Orlando, went out for wrestling here for three years and for basketball one year. He is a moving picture projector operator. Robert worked during high school for the Harris trucking firm. He likes music, mechanics and sports. Next year will find him at Oklahoma A. and M. College where he will study mechanical engineering.

Bob was a lifetime member of the VFW and American Legion. He was employed as a chief mechanical engineer for co’s in Chicago and Elk Grove after leaving the Air Force.

He served in many branches of the service starting with enlisting in the National Guard at age 15. He served with honor lastly in the Air Force as a Captain and saw duty in WWII and as a pilot in the Korean War earning many medals including the Distinguished Flying Cross.

He was preceded in death by parents, Earl and Marguerite (Neuerburg); brother, Harry; wife, Ruby(Allen); and daughter, Rose Marie Witt.

Memorial Service to be held Aug. 19 at Memory Gardens in Arlington Heights at 1 p.m.