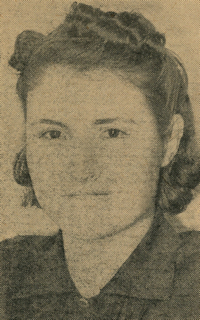 ﻿- daughter of Mr. and Mrs. F. F. Ritthaler, will leave a record of having attended only Perry schools behind her when she gets her diploma. She is a 100 per cent Perry girl with tastes leaning toward music. She played in the band and orchestra and was in the glee club. Mary Ellen likes to read, go to the movies, participate in sports and play the piano. After graduation, she plans to go to the Oklahoma College for Women at Chickasha.

She was born at Perry, Oklahoma on November 3, 1922, the daughter of Frank and Elizabeth (Richardson) Ritthaler. She was baptized in the First Christian Church at Perry. She was a 1939 graduate of High School in Perry and attended Oklahoma College for Women and Oklahoma A&M.

Mary Ellen was married to Irwin “Neil” Smelser on April 10, 1948 at Enid, Oklahoma. They made their home in Perry where their first two children were born. They relocated to Oregon in January of 1954 to begin a new life.

Mary Ellen was a secretary and word processor. She worked for the Department of Human Services in Perry, Oklahoma and Austin, Texas as well as in Oregon and California. She also worked at the First National Bank in Perry. She retired in Austin in September, 1993.

She was a marathon walker for Special Cause Organizations, was a church pianist, and was active in her church, politics and civic minded. In her youth she was a member of Rainbow girls, enjoyed horseback riding and fishing, which she continued to enjoy later in life. She belonged to the Austin Police Department’s Texas Volunteer Militia and was well respected in that community. She dreamed of becoming a realtor and later in life succeeded in becoming a real estate agent in both Oregon and Texas.

Mary Ellen enjoyed long walks with a favorite dog, Scarlett. She loved her independence and refused to surrender it. She was the loving mother to three successful children, who, along with her many friends and extended family, will miss her quiet love and devotion.

Funeral services will be at 10:00 a.m. Saturday, November 11, 2006 at the First Christian Church in Perry, Oklahoma. Rev. Martin Foster will officiate. Interment will be in Grace Hill Cemetery at Perry. Services are under the direction of Brown-Dugger Funeral Home of Perry. Memorials may be made to the charity of the donor’s choice in care of Brown-Dugger Funeral Home, 1010 N. 7th Street, Perry, OK 73077.

In addition to her parents, she was preceded in death by her sons, Frank James Smelser and John Carl Smelser; her brother, Frank Ritthaler Jr. and two sisters, Retta Ritthaler Marshall and Emmarie Ritthaler Gatewood.