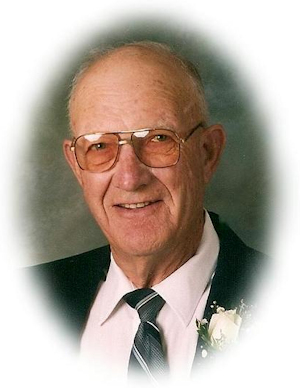 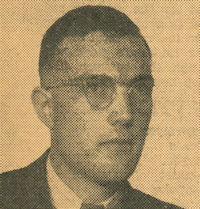 In 1936-37 he played center on the high school basketball team. John is an active member of the local chapter of the Future Farmers of America, and he has placed sixth and thirteenth in the fat lamb show in Oklahoma City. He was a delegate to the state FFA convention in 1939 and is the owner of three grand-champion sheep. This year he received the Junior Master Farmers degree at the state convention held in Stillwater.

His hobbies are horseback riding, fishing and hunting. He was secretary of the FFA club in 1938-39.

John M. Berry, 86, of Perry, Oklahoma, was the son of Henry H. and Mary Johnson Berry. He was born December 27, 1921 east of Perry, Oklahoma in the house in which he lived all of his life and died Monday, August 25, 2008 at Perry Memorial Hospital.

John was a 1940 graduate of Perry High School. He was a member of FFA and received the Junior Master Farmer Degree in 1940. He and Dorothy Edwards were married on September 2, 1945 in Perry, Oklahoma.

A lifelong resident of the Perry community, John was a farmer-rancher and had been a carpenter, employed at Long Bell Lumber Company and the A.C. Houston Lumber Company, later owned by Harold Sorrell. John worked at Charles Machine Works for 17 years before retiring on December 30, 1989.

He was a member of the First Christian Church where he had served as Sunday School Superintendent, a deacon and an elder. John enjoyed football and basketball, especially the OU teams.