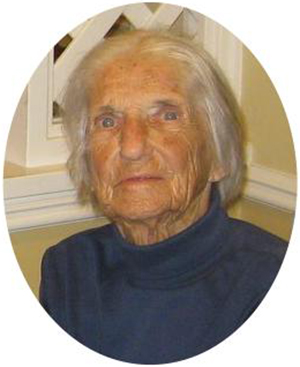 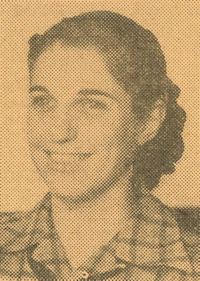 – daughter of Mr. and Mrs. Fred Lindeman, 733 Ivanhoe street. She was born in the same home where she is now living on July 24, 1921. She has always attended the Perry schools.

In 1939 she took part in the senior play and this year was prompter for the senior play. She is an active member of the Red Hots, pep organization, and served in the capacity of president of the club for the past two years. She was also drill leader when she was a junior, and vice-president during her sophomore year in high school.

She was a member of the student council for three years. She won a health medal at the interscholastic meet in Stillwater at one time and has attended all but one football game in the past five years, both here and out of town.

Ruth plans to attend Oklahoma A. and M. college in Stillwater next year, where she will study either physical training or home economics.

Her hobbies include collecting whisky bottles, all types of sports and sewing.

Ruth Eleanor Queen was born on July 24, 1921, in Perry, Oklahoma and was the daughter of Fred and Carrie Lindeman. She passed away on Sunday, February 13, 2011, in San Juan Capistrano, California.

She attended and was a graduate of Perry High School. She also attended a 2 year business college in Oklahoma City. Ruth was employed at First Bank and Trust in Perry for over 35 years as a teller and an officer at the bank.

Ruth was an avid walker and participated in the Cherokee Strip 5K Land Run until the age of 81.

Throughout the years she was in various clubs and organizations in Perry such as the Perry Garden Club, Bridge Clubs, serving at the Lions Club luncheons, worked in the church helping with Vacation Bible Schools, balancing donations and making deposits, and giving communions to those in the nursing home. She was a friend to many and was always willing to help those who needed assistance. She also enjoyed visiting her sister and family in Houston, Texas and her son in Laguna Niguel, California.

The Lindeman family was well known in the Perry community. Her parents owned several farms in the Perry area and operated the Lindeman Grocery Store located on the south side of the square.

She was preceded in death by her husband, her parents, her sisters, Mary Powers, Lucile Sidy Craft, and Philamene Hardin, and one nephew, Mark Craft.