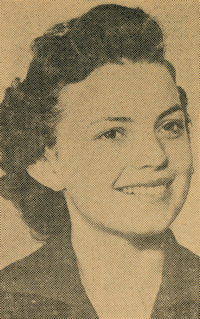 In addition to the other organizations, Margaret is a member of the Junior Home Culture club, orchestra, mixed chorus, girls’ trio and brass sextet. She appeared in both the junior and senior plays and played in the spring concert. Margaret was rated superior in French horn solo in the district contest at Tonkawa, in the tri-state festival at Enid and in the national conference at Stillwater. The brass sextet also won a superior rating in those same contests.

She has been DeMolay sweetheart for the Perry chapter and was a candidate for basketball sweetheart.

Margaret plans to enroll in the school of music at the Oklahoma A. and M. college next year.

Margaret Ruth Black died at home of complications due to ovarian cancer.

She was born near Perry, Oklahoma to Louis and Girtha Plumer. She was a music major at Oklahoma State University for four years and was listed in Who’s Who in American Colleges and Universities.

In 1944 Margaret married Willis (Bill) Black and moved to Oregon where Bill graduated from OSU. They then moved to Cupertino, California and after eight years there, they returned to Salem where she taught piano and organ to mostly adults for the next 30 years. She played many concerts in Salem and surrounding areas, as well as being the featured organist at the Oregon State Fair for many years. She was the Capitol organist for the inauguration of Governors McCall, Straub, and Atiyeh. Besides her music, Margaret was also an avid golfer, bridge player and gardener.

She was preceded in death by two brothers, Harold and Paul Plumer.

In lieu of flowers contributions may be made to the church or Willamette Valley Hospice, 2700 Market Street N.E., Salem, Oregon 97301. Arrangements made by Keizer Funeral Chapel.