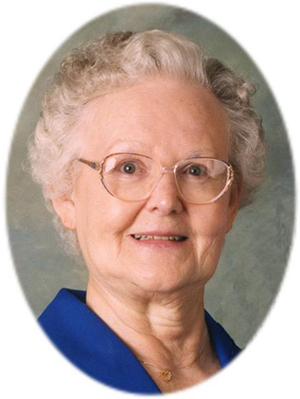 Dorothy Jean Edwards Berry was born on September 25, 1924 in Perry, Oklahoma to Roy Edwin and Cynthia Almeda Woodrum Edwards. She went to her heavenly home on December 23, 2010 at Green Valley Nursing Home.

She graduated from Perry High School in 1942. While in high school she was a member of the Red Hots Pep Club. Following graduation she lived and worked in Oklahoma City for a brief time before returning to Perry. She was employed at Foster Corner Drug, when she met her future husband. She and John Berry were united in marriage on September 2, 1945 and resided on his family farm. Dorothy worked as a bookkeeper at the A.C. Houston Lumber Company and Sorrell Lumber Company from 1965 to 1970.

She was a devoted daughter, sister, wife, mother and grandmother. She was a very caring and sweet lady who loved her Lord and family very much. She will be deeply missed by those who loved her and will never be forgotten.

She was preceded in death by her husband her parents her brothers, Steve Edwards, Robert Edwards, and Thomas Edwards and her sisterinlaws, Ada Edwards and Irene Edwards.