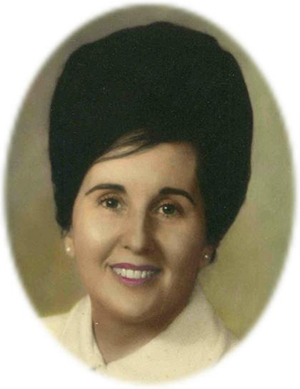 Three members of the W. S. Adams family of Lucien will be serving the country in one direct manner or another when Willa Jean Adams graduates from Perry high school this spring and enters nurses training.

Willa Jean has lived in Perry for around 13 years, although she was born 17 years ago in Lucien. She attended grade schools here and in Lucien. School honors attained include serving as homeroom secretary, student council member, orchestra and band. She belongs to the Order of Rainbow for Girls and has played with the band in Enid for the past two years.

She has two brothers, both in the army. One, Lt. Merwyn Adams, is at Carlsbad, N. M. and the other, Pfc. Robert Adams, is in the army air forces at Wilburton.

On April 22, 1944, she and William Harcourt Thomas were married in Pauls Valley, Oklahoma. Her husband preceded her in death on January 28, 2002. Willa was a homemaker and a great cook. She had a green thumb and enjoyed gardening and sewing. She was a member of the First Presbyterian Church in Tulsa and Daughters of the American Revolution and Daughters of the American Colonists.

In addition to her husband, she was preceded in death by her parents, William and Manilla Adams, and two brothers, Robert Adams and Barney Adams.