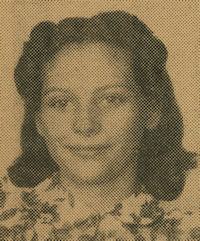 She was also an active member of the 4-H club. Her hobbies are sports, sewing and collecting movie stars’ pictures. For two years she received perfect attendance certificates.

Rose Marie plans to attend a beauty school and to become a beauty parlor operator.

The funeral for Rose Marie Culp, 83, will be 10 a.m. Wednesday at Calvary Assembly of God Church, Enid, Oklahoma. The Rev. Richard Fleig will officiate. Burial will be in Memorial Park Cemetery.

She grew up and attended schools around Perry where she graduated from high school. She was a bookkeeper at St. Mary’s Regional Medical Center many years and operated Colonial Heights Resort in Grove. She was a member of Calvary Assembly of God Church.

She was preceded in death by her husband Ray Allen Moore, two sisters and one brother.

Memorials may be made through the funeral home to Calvary Assembly of God Church.