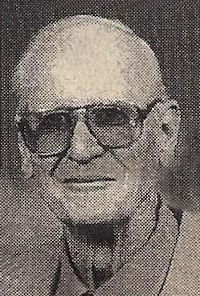 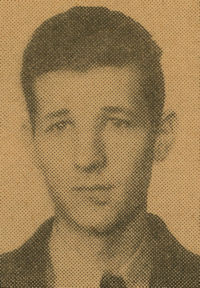 For the past four years he has played the position of forward on the high school basketball team and has lettered in basketball. His hobbies are playing basketball and baseball.

He was born Oct. 20, 1921, at Perry, Okla., the son of William Wesley Burk and Doris (Dearborn) Burk. He grew up in Perry, where he attended the local schools and was a star basketball player for the Perry High School.

He was a veteran of World War II, serving with the U.S. Army during the D-Day invasion.

He was united in marriage to Ruth S. Staley on March 11, 1943, at Stillwater, OK. She survives of the home.

Mr. Burk moved to Manhattan in 1946 and worked as a meat cutter for the A & P Grocery for over 27 years. He later worked for Safeway, Falley’s and retired from the Food-4-Less Grocery in 1984 after nine years of service.

He was preceded in death by his parents; two brothers, Wayne Burk and Kenneth Burk; and an infant sister, Betty Jean Burk.

Funeral services will be at 2 p.m., Monday in the First Christian Church, Manhattan, with the Rev. George Bever officiating. Burial, with full military honors, will follow in the Ashland Cemetery, south of Manhattan.