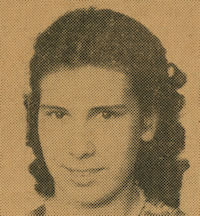 ﻿- daughter of Mr. and Mrs. Thomas C. Wolleson, is 16 years old and lives at 1017 Cedar street. She was born in Oklahoma City in 1923 and has always attended the Perry schools.

In 1938-39 she was a member of the girls’ glee club and took part in the Christmas cantata presented by it in 1938. She is a member of the Order of Rainbow for Girls, National Honor Society and was secretary of her junior and sophomore home room classes.

Her hobbies are making scrapbooks, playing tennis and swimming. She plans to attend college next year, taking a commercial course in order to become a secretary.

A memorial service celebrating the life of Audra Eve Baxter, 81, is planned for Monday, March 7, 2005, at 2 p.m. in the sanctuary of McFarlin Memorial United Methodist Church, at the corner of University Boulevard and Apache Street.

Mrs. Baxter died Feb. 21, 2005 at Grace Living Center in Norman, Oklahoma, after a short battle with pancreatic cancer. She was preceded in death by her husband, James B. Baxter.

Audra and her husband made their home in Ardmore where they raised their two daughters. After James’ death in 1986, Audra moved to Rogers, Ark. and later to Monroeville, Penn. Then, Audra returned to Oklahoma and spent the last two years of her life at Norman.