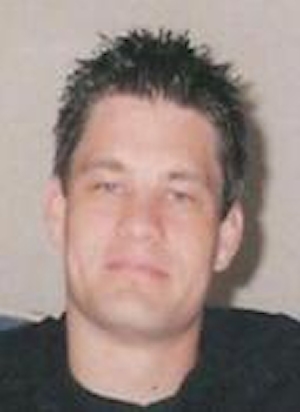 Christian “Chris” David Sadler, 31, of Perry, Oklahoma was born the son of David Sadler and the late Marion Nichols on June 17, 1977 in Enid, Oklahoma and passed from this life to be with his Lord and Savior November 14, 2008 at Mercy Health Center, Oklahoma City, OK.

He was the loving husband of Nicole Sadler, and father of Peyton Nicole Sadler. The love Christian had for his family and friends was unconditional and his passion for life was evident in everything he did.

Christian grew up and attended school in Ponca City, OK later moving to Perry in the 5th grade and then graduating from Perry High School in 1995. He pursued his education in arts at Northern Oklahoma College, graduating with an Associates Degree.

After graduating college, Christian moved to New Jersey where he met and married the love of his life Nicole Gianndrea on May 13, 2005, at Bethel Christian Center in Blackwood, New Jersey. While living in New Jersey he pursued and enjoyed his art, modeling, and acting interest.

In 2005 he moved back to Perry, OK and was employed with EZ Drill Inc.

He later followed his calling and became the full time Youth Pastor of Perry Assembly of God Church, and was very strong in his faith.

October 7, 2008 their only daughter Peyton Nicole Sadler was born. Seeing their daughter born was a highlight to both of their lives.

His hobbies included basketball, sculpting, drawing, painting, and watching football. Christian was wonderful, caring, and respected by many people.

Funeral services are scheduled for 2:00 p.m. Monday, November 17, 2008 at the Perry Assembly of God Church with Pastor Brett Nation officiating.

Interment will be in the Grace Hill Cemetery.