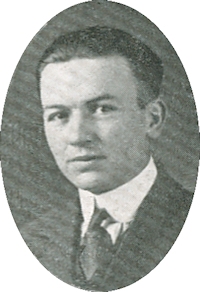 Foster, son of a pioneer Perry family, suffered a heart attack nearly a year ago, but had recovered sufficiently to return to part-time duties at his office, Sixth and Delaware streets. He became ill about 4 o’clock Wednesday while at the tag office, and went home to rest. Another heart attack proved fatal shortly after 7 p.m.

The deceased was employed by the old Farmers and Merchants bank for three years before his marriage. He was employed for two years by the late Fred Cooper as a car salesman, and operated the Foster & Tucker battery service before becoming bulk agent for Magnolia Petroleum Corp., which he served for fifteen years.

In addition to his wife and father, he is survived by two sons, Robert, a DuPont chemist in Wilmington, Del, who will arrive here Friday night, and David, a student at Oklahoma A. & M. college; two sister, Mrs. Ben Beckham, sr., of Perry and Mrs. Ora Nida of Muskogee; three brothers, Orville Foster and Dick Foster of Perry, and Ned Foster of Enid.

His mother preceded him in death in 1941.