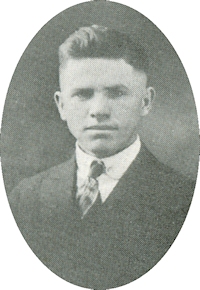 President Club Espanol, Athenian ’20, Football ’19.
“All other great men are dead
And I am not feeling well.”

Funeral will be at 2 p.m. Tuesday in the First Methodist church with Rev. Oscar Fontaine, pastor, officiating. Burial will be in Grace Hill cemetery under direction of the Parker funeral home.

Thompson was admitted to Memorial hospital Friday afternoon. Born Sept. 10. 1896, in Oswego, Kan., he was married here in 1928 to the former Marie Leighan, who survives. He came to Noble County in 1915. Thompson received a permanent appointment as rural mail carrier Jan. 2. 1919, and had served the same Noble county area south of Perry for 39 years. He covered route 2, Perry.

A member and former steward of the First Methodist church, he also had been an active member of the Knights of Pythias. He had served as chancellor of the KP’s and was a member of the Masonic lodge. The Thompsons had lived on a farm northwest of Perry since 1931.