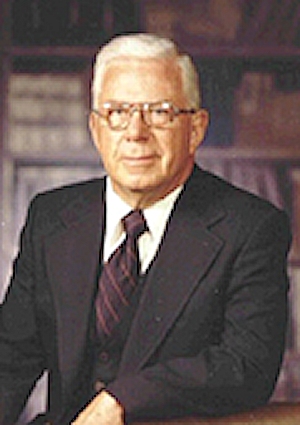 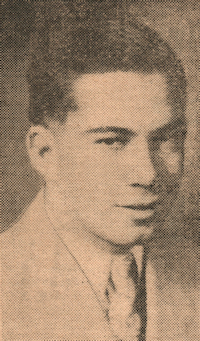 – son of Mr. and Mrs. L. B. Swearingen of Perry, was born in Grant, Neb. on Aug. 21, 1920. Eugene attended the primary in Grant and the remainder of the elementary grades in Perry. He attended high school in Perry. During his high school career he was a member of the National Honor Society, student council and wrestling. He took an active interest in scout work. Following graduation he expects to attend college.

Eugene L. Swearingen, former chairman of the Bank of Oklahoma and former president of the University of Tulsa, died Sunday at the age of 82. Memorial services will be at 2 p.m. Tuesday at First United Methodist Church.

Swearingen, a native of Grant, Neb., attended public school in Perry and Northern Oklahoma Junior College in Tonkawa. He received bachelor’s and master’s degrees from Oklahoma State University. He received a doctorate in philosophy from Stanford University and did further studies at Harvard, Williams College, Dartmouth College and the University of California.

He was the first Eagle Scout in Noble County.

During World War II he served as an officer in the Navy. He was serving aboard a destroyer escort when it was torpedoed and sunk in the North Atlantic.

In 1957 he was named dean of the College of Business at OSU, where he later served in various vice presidential posts.

Although retired from banking, Swearingen remained active as a consultant, teacher and in civic affairs. He was a consultant to Kerr-McGee and served on the boards of Parker Drilling Co., First Bank of Trust of Perry, Charles Machine Works of Perry, Local America Bank of Tulsa and was one of the Regents for Higher Education.

Until his death he continued to teach business at Oral Roberts University.

Swearingen remarried after the death of his first wife, Aasalee. Survivors include his wife, Jane; three daughters, Linda Miller of Skiatook; Sandra Grant of Stillwater and Sherry Peet of Tulsa; two stepsons, Jason Nunley and Philip Nunley; and a brother, Wayne of Tulsa.

In lieu of flowers, contributions may be made to the Boy Scouts of America and the scholarship funds at OSU, TU and Oral Roberts University.