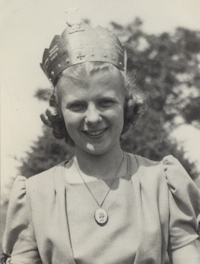 – daughter of Mr. and Mrs. Henry Wilde, was born in Covington, Okla. She attended the Lutheran school before attending Perry high school. She is a member of the high school orchestra, student council and was band queen from 1936 – 1938. She plans to be a nurse.

Claire, a longtime New Mexico resident of Santa Fe, Carlsbad and Albuquerque, was born in Garber, OK, and graduated from Perry High School in 1938, where she fondly recalled being elected Band Queen. She married her high school sweetheart, W.H. “Dub” Barnett of Perry the same year and following his US Naval service in World War II, she and Dub relocated to New Mexico where they enjoyed 75 years of marriage while Dub worked in the lumber/building goods business.

Clair loved her adopted New Mexico. She was active in various civic organizations, including service groups in local Lutheran congregations. She loved culinary entertaining. In 1956, while residing in Carlsbad, she was crowned Mrs. New Mexico and represented the state in the National Mrs. America competition at Eleanor Gardens, Florida, sponsored by the National Gas Association. In that competition she won first place in Pie Baking, the National Civil Defense award and was honored by her peers as Mrs. Congeniality.

She is survived by two sons, William H. “Bill” Barnett of Edmond, OK and Douglas Barnett and his wife Karen, of Henderson, NV; four granddaughters and two great granddaughters.Memorials can be made to Grace Lutheran Church, Albuquerque, New Mexico.