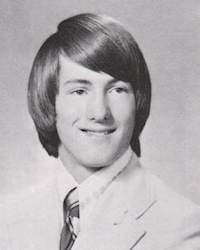 William “Bill” Wakefield Busby III, 46, of Bartlesville, Oklahoma was the son of William Wakefield Busby Jr. and Helen Medus. He was born on August 31, 1956 in Perry, Oklahoma and died March 18, 2003 at his residence.

Funeral services will be 2:00 p.m. Friday, March 21, 2003 at the St. Marks Episcopal Church in Perry, Oklahoma. Rev. Bill Powell will officiate. Interment will be at Grace Hill Cemetery. Services are under the direction of Brown-Dugger Funeral Home.

Memorials may be made to the Perry Takedown Club or the American Diabetes Association. Contributions may be made in care of Brown-Dugger Funeral Home.

He was preceded in death by his father, William Wakefield Busby Jr.