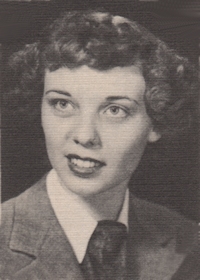 Swearingen was born Sept. 14, 1932, in San Angelo, Texas, to Roy and Margaret (Jones) Williams. She received her early education in Perry and graduated from Perry High School.

She attended Oklahoma College for Women in Chickasha and graduated with a bachelor’s of music degree in piano. After graduation, she returned to Perry to live with her parents and opened a teaching studio in the original First National Bank Building.

She married Dean Swearingen on Aug. 17, 1956, in Perry. They lived in Perry and commuted to Stillwater while he pursued a career in the oil business. They also lived in Ada, and she worked as a secretary in the family owned DES Engineering Company. After her husband died in 1994, she moved to Stillwater to be near her two children. She was a member of Stillwater Woman’s Club and A.A.R.P.