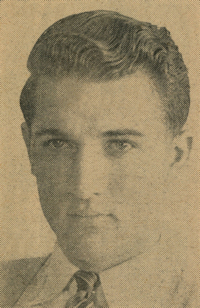 – plans to go to college in Kansas or to Oklahoma A. and M. College after graduation. He has held down several jobs here and in New Mexico before entering his senior year in school. He is the son of Mr. and Mrs. Wesley Burke of 1224 Fir street. He likes movies. He attended Hobbs, N. M., high school and Perry high school. He is a native of Perry having been born here in 1919. He won a silver football award, ribbons in Noble County Track meets and a basketball letter for his athletic participation in high school.

﻿ Kenneth W. Burke, 58, Tulsa, a native of Perry, died unexpectedly about 10 a.m. Monday at his home of an apparent heart attack.

Burke was born in Perry Sept. 21, 1919, and graduated from Perry high school in 1939. He left Perry shortly after high school graduation and served in the Navy in World war II.