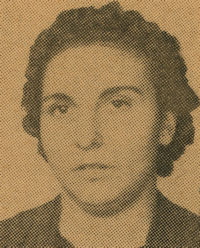 – 16, is the daughter of Mrs. Elizabeth Brown, 1109 Fir Street. She was born June 20, 1923, in Perry and attended St. Joseph’s Academy in Perry and the Cooper school before coming to Perry.

She plans to go to a business school next year or take up beauty work.

Her hobbies are collecting autographs and keeping a scrap book.

Ms. Brown was born June 20, 1923, in Perry and was the daughter of Earl and Elizabeth (Tobin) Brown. She was a 1940 graduate of Perry High School and later attended Ponca City Beauty School.

She moved to Ponca City in 1949 and owned and operated Highland Beauty Shop until 1980, when she moved the business to her home. For the past several years, she worked part time at Westminster Village.

Ms. Brown was a member of St. Mary’s Catholic Church. She made and delivered booties to newborn Catholic babies at St. Joseph Regional Medical Center.

She was preceded in death by her parents, two sisters, Margaret Stone and Alice Inselman; one brother, Edward Brown; and one nephew, James Brown.