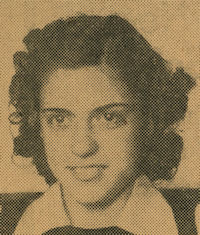 – 16 years old daughter of Mrs. Bertha Warner, 620 Noble street. She was born in Perry, October 30, 1923, and for the first eight years of her schooling she attended the Lutheran school in Perry.

In 1937-38 she was a member of the glee club and took part in the operetta presented that year. She has also been a member of the Red Hots, pep organization for the past year.

She has received honors in glee club and the Red Hots. Her hobbies are making scrap books, photography and sports. Next year she plans to attend St. John’s college at Winfield, Kans.

On November 15, 1946, she and Husdon Talbott were married in Tulsa, Oklahoma. After living in Westport, Connecticut, the family moved to Seven Lakes in 1986. Mr. Hudson preceded her in death in 2008.

Ms. Talbott was a homemaker.

A memorial service is planned in Seven Lakes at a later date.